How I Set a 5k Personal Record After 7 Years! 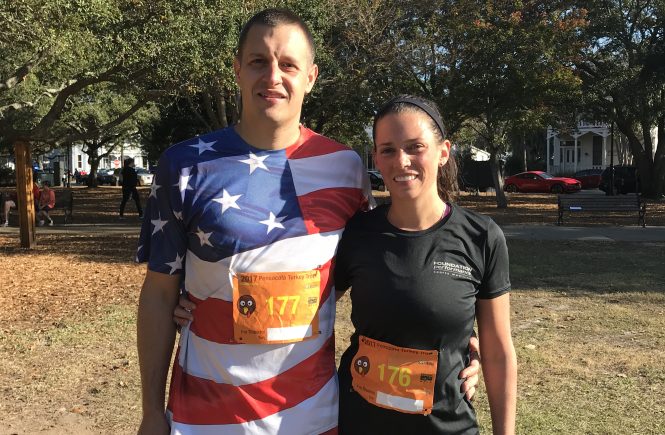 On Thanksgiving Day of 2017, after more than 7 years of 5k races, I finally ran a new personal record time in a 5k road race.  I had been trying to break this record for the past 7 years! I didn’t win the race and I didn’t receive a trophy, but I have never felt so elated post race in my life.  Here’s how I finally broke through and achieved a new record.

Back in June I decided to run a local 5k race, so I trained for it the way I had always trained for races.  Race day came, I ran as hard as I could and I finished in the same time that I had run for years (22:15).  I couldn’t help feeling somewhat disappointed as I came to the realization that I hadn’t made any progress with my running in years.

I ran on the cross country team in college, and it’s been 8 years since I graduated. Since then, I have run many 5k races, a few 5 and 10 mile races and one half marathon.  Every year I wanted to run a faster 5k, but hadn’t changed my training to achieve this (isn’t this the definition of insanity, doing the same thing and expecting a different result?).    After the race in June, I was frustrated and decided it was time that I get serious and train to run a new personal record (PR).  I looked back in my archives and found that in 2010 I had run a 5k in 21:24 and decided that was the time to beat.

I don’t know about everyone else, but the best motivation for me to get out and go for a run is to sign myself up for a race.  I picked a local 5k that was about 6 weeks away and signed up.  Then I stepped up my training.  Although I had been going for runs here and there and trying to do a speed workout each week, I knew that I needed to increase my weekly mileage and also increase the mileage of my weekly speed workout.  In order to prevent injury, I tried to only increase my mileage by 10% per week.  For example, I had probably only been running about 10 miles per week, so the following week I would do 11 miles total, then the next week 12-13 and so on.  I knew 6 weeks wasn’t going to be long enough to get myself into shape to meet my goal, but I thought doing a 5k in 6 weeks would provide motivation, and also be a good way to measure my progress.  By the time the race rolled around, my weekly mileage was up to about 25 miles per week.  I ran a 21:40 at the race.  I was really happy with this time and I felt that the PR I was aiming for was within reach.  Again, I picked a 5k race 6 weeks out and signed up!

I decided at this point that I needed to come up with a concrete running plan.  I watched a lot of youtube videos on how to improve your 5k time and everyone said, “increase your mileage”, which is great advice, but it left me wondering how many miles I should run per week.  It seemed like no one wanted to put a number out there, so I turned to my dad who is now in his 60s and can probably still whoop me in a 5k and he said, “run 30+ miles a week.  30 is the magic number, you will see drastic results if you get in at least 30 miles a week.”  So I had my answer.  I made myself a schedule which looked roughly like this:

Following this schedule would put me at 32-34 miles a week with a variety of runs, some easier, some faster, some shorter and some longer.  I was able to get 5 consecutive weeks of this schedule in before the next 5k race.  I was really nervous for the race because I felt like I was finally putting in a solid effort, running 6 days a week and I wanted it to pay off.  I am happy to report that I absolutely crushed my prior PR of 21:24 by running a 20:29 which allowed me to finish as the first female loser (2nd place).  I was elated.  I felt like I was working just as hard during the race as I had been when I was running slower times, which means the training really paid off.  I would  like to note that my husband also ran the race, and he too ran away with a new PR.  Matt had been only doing 3 runs a week, one of which was the track workout with me, which goes to show just how important the speed workouts are for improving your 5k time.

Now that I have a new PR, I have a new goal: to break 20 minutes in a 5k.  My hope is that by continuing with my running schedule and focusing on improving my form during workouts, I will be able to run my next 5k in under 20 minutes.  Follow me on my running journey by subscribing to my blog.

Disclaimer: We are not experts or professionals of any kind. Please use your own judgment when applying any information presented on this site. The information on this website has not been evaluated by the FDA and is not intended to diagnose, treat, prevent, or cure any disease.
© The Fancy Goat LLC